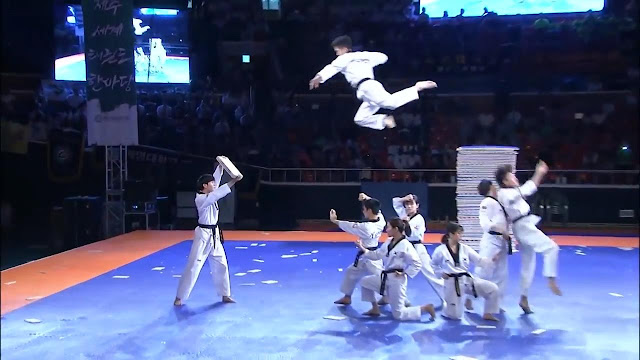 Remember when you were a kid and you would watch all those kung-fu films and despite them being awesome there was no way that most of that stuff was possible?

Kicking people in the chest in mid-air. Punching through a brick wall. Easily running up a wall and balancing perfectly on a branch.

Even a movie like Crouching Tiger, Hidden Dragon that tried to present the genre in a very thoughtful and considered way still couldn't make it look entirely realistic.

However, we are happy to report that not only were those films somewhat accurate but their stunts can also be recreated in real-life.

Step-forward the South Korean Taekwondo team who put on this jaw-dropping display at this year's World Taekwondo Hanmadang, an annual martial arts festival held in the country, which has gone viral.


We honestly don't know how to explain some of these moves but we never thought we'd see a person 15 feet into the air smash a wooden board to smithereens and land perfectly land on their feet.