Incredible aerial footage shows the moment a group of good Samaritans worked together to rescue the driver of a pickup truck that had just overturned on a busy Illinois highway.

Chopper video taken by ABC Chicago station WLS shows the moment the tire on a Ford Ranger blew on Interstate 88 near Oak Brook around 6:45 a.m. on Monday, causing it to spin out of control and roll onto its roof.

Good Samaritans rescue a driver after a pickup flips on the highway in Oak Brook, Ill. , July 22, 2019.

Nearly a dozen rescuers, many construction workers, then rushed to the driver's aid, using their collective strength to heave the truck onto the passenger side as they tried to figure out how to help the driver, identified by Illinois State Police as 32-year-old Orlando Hernandez.

Tom Meyers was leaving his full-time job as a firefighter in Rosemont, Illinois, for his part-time firefighting job in Aurora Township when he drove past the scene.

"Anytime you see something like that happen, you always … have that urge to help," he told WLS.

EXCLUSIVE VIDEO - GOOD SAMARITANS RESCUE DRIVER: A group of good Samaritans rush to the rescue of a driver of a pickup truck that flipped over on I-88 in west suburban Oak Brook Monday morning. WATCH: https://t.co/OEUTOdaUvG pic.twitter.com/soAgN4I3kQ
— ABC 7 Chicago (@ABC7Chicago) July 22, 2019

The group had already flipped the truck, and Meyers pulled up just in time to extract Hernandez from the wreckage.

"At that point, I knew we had to get the windshield and try to cut the seat belt," Meyers said.

Meyers and others used the construction workers' tools to break the windshield and cut Hernandez's seat belt, WLS reported.

The group cheered once they realized Hernandez wasn't seriously injured.

"He said, 'I want to get out,'" Meyers said of the driver. "I said we should probably wait for the fire department to show up, and that's when he proceeded to jump out the window." 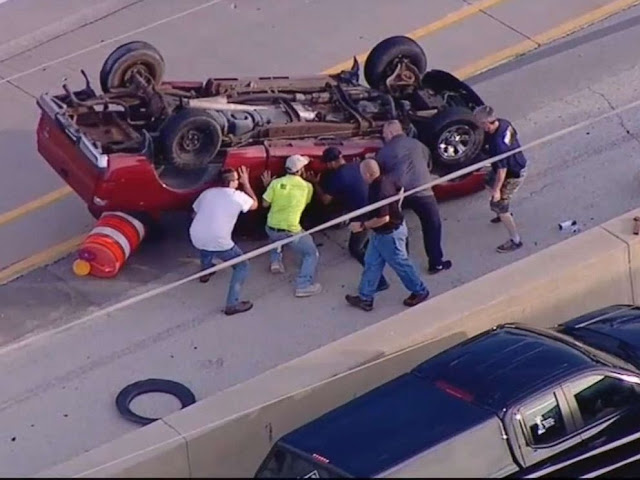 Good Samaritans rescue a driver after a pickup flips on the highway in Oak Brook, Ill. , July 22, 2019.

State police also identified 23-year-old Melrose Park, Illinois, resident Rodrigo Macias as a member of the rescue group. The other identities of the other good Samaritans are unknown, police said.

Firefighters and paramedics then arrived on the scene and transported Hernandez to a local hospital. He suffered non-life threatening injuries, police said.

The truck Hernandez was driving was totaled in the crash, police said. It is unclear how fast he was traveling when the tire blew.