NASA WILL BE SENDING A QUADCOPTER CALLED DRAGONFLY TO TITAN 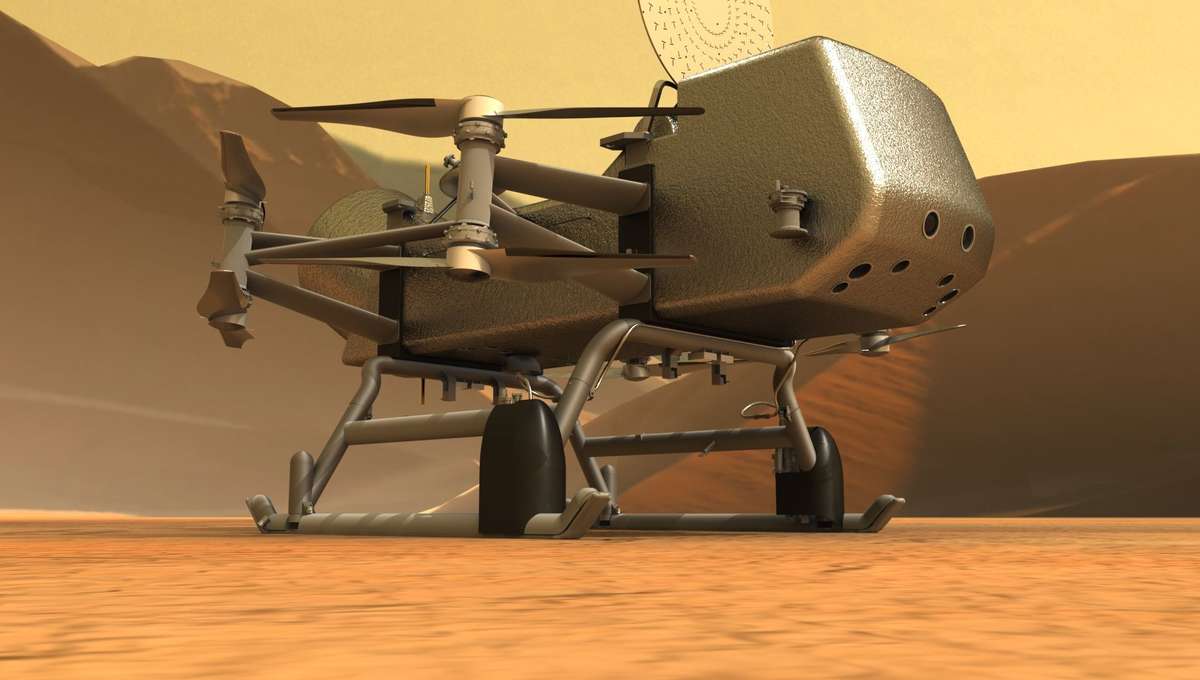 Hey, go ahead and read that title again. It sounds like science fiction, but it's science fact: NASA is sending a flying robot to Titan, the largest moon of Saturn and a world where organic molecules rain down from the sky and fall into lakes of liquid methane.
The mission is called Dragonfly, and it will be part of NASA's New Frontiers program, missions that target high-priority solar system science goals — current New Frontiers missions include Juno at Jupiter, New Horizons (currently in the Kuiper Belt), and OSIRIS-REx, which is orbiting the tiny asteroid Bennu.
Dragonfly is so cool I can hardly stand it: It's a quadcopter, with four pairs of coaxial propellers each mounted at the corners of a 3-meter-long lander. The idea is that it can land in one spot on Titan and then fly in short 8-kilometer hops to other places where it can perform scientific measurements. It will be able to take images, sample the air and surface materials to determine their chemical composition, take meteorological and seismological measurements, and survey the surrounding areas as it flies. The goal: Examine the environment so we can better understand this huge moon, and look for the ingredients, the building blocks of life there.
Titan is a world that is both as alien as it can be and yet eerily similar to Earth. Saturn is over 1.4 billion kilometers away, so Titan is cold. Water on its surface would be frozen into ice harder than granite is on Earth! But it has a nitrogen atmosphere that’s 50% thicker than Earth's, enough to support interesting chemistry on the surface.
Titan was examined multiple times by the venerable Cassini spacecraft, and of all the results — including sand dunes made of hydrocarbons, evidence of cryovolcanoes, and even a subsurface ocean of liquid water — the most mind-blowing was the discovery of huge lakes of liquid methane and ethane near the north pole. Close up images using radar that penetrated the hazy atmosphere of the moon showed not only lakes, but hills surrounding them laced with rivers that are tributaries feeding into the lakes. This shows that methane on Titan acts like water on Earth; it evaporates, moves around in the atmosphere, rains down, and forms large standing bodies of liquids.
Sure, it’s -180° C (-290° F), but don't let your high temperature bias sway you. A methane cycle plus plenty of organic molecules to play with means Titan could have all kinds of interesting prebiotic chemistry going on there.
And we’re going to find out what it is.
But… not for a while. The mission is looking at a 2026 launch date, and it'll land on the remote moon in 2034. Oof. Saturn is a long way away. Also, seven years from now to launch seems reasonable to me for building it, though a bit of a squeeze. A lot of the instrumentation is based on known and successful designs, and even the power source — a radioisotope thermoelectric generator that uses plutonium to create electricity because Titan gets about 1% of the sunlight Earth does (not including diminution by its thick, hazy air) so solar panels aren't an option — is similar to the one used on the Curiosity Mars rover. I expect the hardest part will be making sure the propellers work well in the frigid atmosphere. But even then there’s an advantage: The thick atmosphere plus 1/7th Earth gravity will make it pretty easy to fly around. Wind speeds on Titan are low, so that shouldn't present too much of a problem, either.
The nominal mission is a little over two and a half years on (and above!) the surface of Titan, which isn't enough time to get from the landing site among the sand dunes of the Shangri-La region at the equator to the lakes near the pole, but the Johns Hopkins University Applied Physics Labs, which is building the mission, has a history of making tough little probes, like the New Horizons spacecraft which just flew past the Kuiper Belt Object MU69. If it's not too premature, I can hope the mission will be extended enough to get near those Titanic lakes. That would be amazing.
So, congratulations to the Dragonfly team on getting picked up! I'm very excited to explore an alien world in our own back yard.